A few times a week, we make comments about big companies in the news. Our goal is to share with you some useful perspectives on identifying and analyzing risk; i.e. the work of EPS.

Www.barchart.com is a free site which is very useful in identifying stocks which have moved significantly, both upward or downward.

In this page, we will be reviewing companies which have fallen significantly and explaining our perspectives on why they have fallen. Today we’ll talk about one stock: Pacific Gas & Electric (PCG). 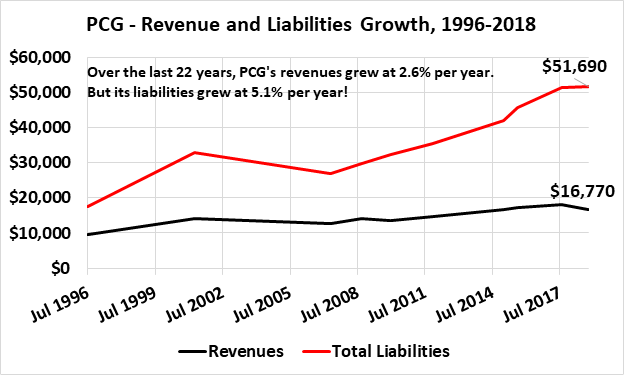 If PG&E (formerly Pacific Gas & Electric) were to pay off its liabilities over 30 years, it would have to pay $3 billion each year. That would be about 18% of revenues.

If the company has no intention of repaying its “bonds”, then why are they called “bonds”? Aren’t these so-called “bonds” not bonds at all?

Were the people who purchased these so-called “bonds” led to believe their bonds would be redeemed by the company?

So, PG&E’s financial condition is terribly, if not profoundly, weak. Thus, as early as February 9, 2018, it is clearly an extremely risky stock to own.

If, hypothetically, PG&E wanted to pay off its liabilities over 30 years, it would cost $3 billion each year. That would be about 18% of revenues.

PG&E clearly has neither the intention nor the capability of repaying its bonds. A bond is legal evidence of a debt and liability of a business entity to the holder of the bond, which always contains dates and amounts for the repayment of the debt. When an issuer, PG&E in this case, has neither the intention nor the capability of repayment, should that legal instrument still be called a bond? We think it would be useful and practical to call such financial instruments something other than bonds. We are not certain that these so-called bonds won’t be repaid; however, facts matter. Only 20 years ago, the total liabilities were less than 200% of their revenues. Over the past 20 years, the management of the company has chosen to increase their debt relative to their revenue at an increasingly rapid pace. Their liabilities now stand at 308% of their revenues.

Read again the above statement PG&E filed 9 months ago. How could anyone conclude that the senior-level management of PG&E had any intention years ago of repaying their debt, when over the past 20 years, almost annually, they increased their debt ratios to the extremely weakened position they now find themselves in? They did not awaken one day and find themselves in debt; they systematically chose to borrow more, rather than manage prudently.